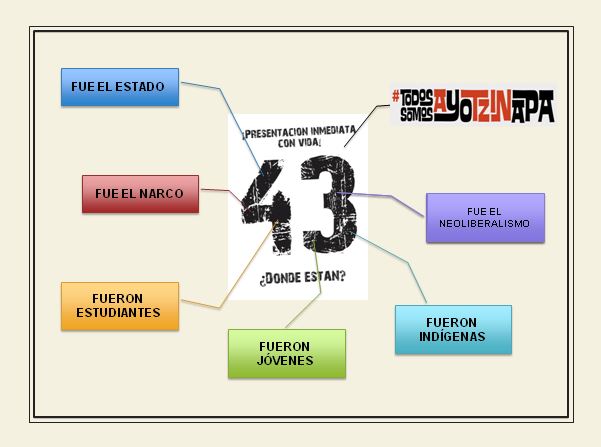 Ayotzinapa as a domination paradigm in Mexico and Latin America - Against what are we resisting?

43  where are they?
was the state – was the narco  – were students –  were youth – were indigenous –  was neoliberalism

If there any characteristic that has overshadowed our Latin American and Caribbean region in the last decades, its violence, or in a more specific way, national territories convoluted by multiple violences that trough the years, far from getting to an end they keep growing and causing damages in different population sector, specially the most vulnerable. It is mainly, an incontrollable criminal violence the result of the strategy of military confrontation from the national governments; but also institutional violence, from the State, that stands as the main detractor of the individual and collective rights of peoples and communities, ignoring their responsibility for the common well being and turning, instead, into a protector, trough militarization, of the interests of transnational companies, which makes us understand that the root of all kinds of violence, there is an economic violence, like labor exploitation, poverty growth and inequality, loss of sovereignty and careless destruction of nature.
That is why, before questioning the role of churches within the resistance and the social movements, it is necessary to deepen our analysis about what we are resisting against. On this task, the Ayotzinapa (Municipality of the state of Guerrero, south region of Mexico) case results paradigmatic where the night of 26th of September 2014 municipal policemen attacked a caravan of students from a rural teacher’s school (Normal Rural Isidro Burgos), killing 6 of them and kidnapping 43. They were, then, delivered to the organized crime and are still disappeared. All of this happened by order of the local authorities and with the consent of the army, who was witness and accomplice of this acts. 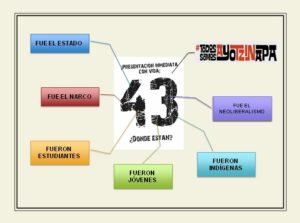 In Ayotzinapa:
1. It was the State: before, we were fighting against corruption, today we are fighting against legality. The government (both left and right wing) has turned into the worst detractor of human rights, and have built an ad hoc legal framework to work with impunity.
2. It was the Narco (organized crime): it is due to the destruction of the social and communitarian fabric, the void of the State, the insecurity, the violence and death. Migrants no longer have as a main purpose pursue the “American dream”, but survival in ambiences of extreme violence.
3. They were young: most of the population on that region is young, without job or education opportunities, young people are a double pray for crime and labor exploitation.
4. They were students: Young people in Mexico are woke, like in many other parts of the world. They have proven their critical conscience and creativity. Students have always been main protesters of an authoritarian, ignorant and rapacious regime. That is why they are systematically exterminated trough violence and dismantling a critical and revolutionary education system.